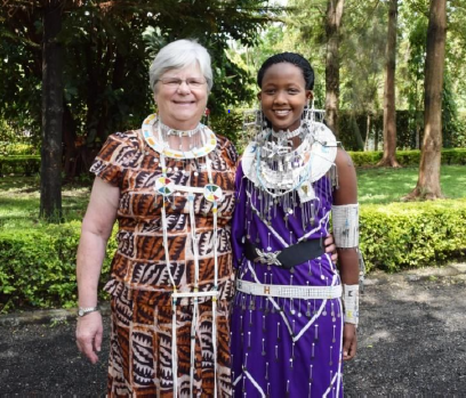 Sr. Mary Vertucci is a Maryknoll Sister missionary who has worked in Tanzania for the past 46 years, and is the founder of the Emusoi Center. She is a secondary school teacher by profession and has taught in both public and private schools in Tanzania.

Sr. Vertucci was born in New Brunswick, New Jersey in 1945, and graduated from the local Catholic grammar and high schools.  In 1970, she graduated from the College of St. Elizabeth in Convent Station, NJ with a degree in Chemistry and Education.  She joined the Maryknoll Sisters Congregation in 1964  and was assigned to work in Tanzania.  She arrived there in 1971. Sr. Vertucci’s first assignment was to teach chemistry and physics in the Korogwe Girls Secondary School, a public school. She taught there for 7 years. Later she moved on to teach in Soni Seminary, Sekei Secondary School and Murigha Secondary School.

In 1999, she founded Emusoi Center, a Center for the empowerment of pastoralist girls. She continues there to the present. The Center has grown to support over 330 girls when it started with 6 in 1999;  close to 2000 girls have been educated by the Center. The Center prepares girls to join secondary education, supports them in secondary education and for two years post secondary studies.
Proudly powered by Weebly